Even the smallest of refinements to a resistance training program can provide for significant differences in adaptation over time. A good example of this is the employment of varying gripping methods during applicable lifts. Utilizing the proper grip for a given exercise will keep joint angles aligned in a manner that will not cause undue stress to major joints such as the wrist, elbow, and shoulder. The primary types of hand positions or grips used in weightlifting include: 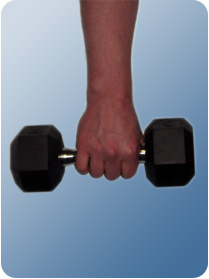 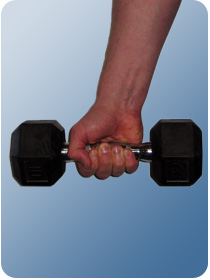 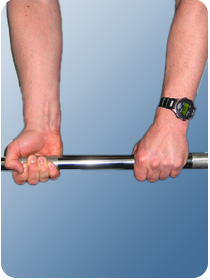 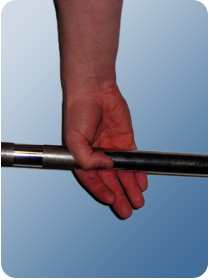 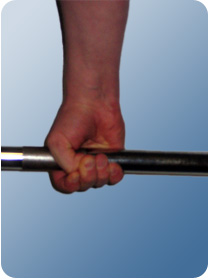 Variations in grip can alter activation of musculature during a number of pulling and pressing actions that challenge the hips, shoulders, and upper back. For example, if a wide, pronated grip is used during pulldowns or pull-ups; the load is resisted primarily through shoulder adduction. This grip variation is used to promote latissimus dorsi activity due to the angle of stress. Conversely, if a supinated grip is used with a relatively narrow hand placement during pulldowns or pull-ups; the biceps brachii will assist the movement to a greater degree and the latissimus dorsi will be challenged through shoulder extension. It is believed that this grip variation can function to encourage additional motor unit recruitment in the latissimus dorsi not attained from pulldowns or pull ups. To illustrate the importance of being aware of the proper hand placement for optimal gains - research clearly demonstrates the greatest activation of the latissimus dorsi occurs during the pronated grip pull up, followed closely by vertical pulls to the front using a wide, pronated grip. If comparing grip variations during the bent-over row exercise, greater activation of the posterior deltoid is seen when using a wide pronated grip when compared with a narrower supinated grip due to a more abducted shoulder position. Likewise, the wide pronated grip promotes greater shoulder horizontal abduction whereas the narrower supinated grip moves the humerus through extension and increases mechanically advantage in the biceps.

It is also useful to note that utilization of wrist wraps during numerous pulling exercises may optimize performance among individuals who have shorter fingers and smaller hands. Although measures of hand grip dynamometry demonstrate correlation with total body strength, smaller digits decrease mechanical advantage and large muscle often fatigue slower than the muscle of the hand causing technique breakdown before the prime mover is overloaded. Employing a hook grip during heavy pulling actions such as the deadlift or shrugs (or Olympic variations) is believed to reduce stress in the hands and forearm musculature by enhancing grip tension and connection with the load used – oftentimes a barbell. This grip involves bending the thumb into a ‘hook-like’ position and pressing it against the barbell, and then wrapping the fingers around the thumb and load to maintain a strong connection and potentially translate greater pulling force directly through the fingers into the wrist. If an individual has short fingers, he or she might be unable to wrap them around their thumb and the load; resulting in loss of grip strength during subsequent repetitions of a set. If the bar is not kept tight against the palms because of short fingers that cannot wrap around it to maintain a strong connection, rapid hand fatigue may occur. This may cause the lifter to translate the force needed to overcome the load through the distal portions of the fingers into the wrist as the weight slowly slides down the hands. This weak link distal to the wrist joint can ultimately reduce force transfer through the upper extremities affecting the ability of the prime movers associated with the movement to overcome the load. Utilization of wrist wraps allows the lifter to maintain an extremely secure connection by wrapping the strap component around the barbell or dumbbell multiple times. It is recommended that individuals use wraps as necessary so that grip strength or hand dimensions are not the limiting factors to strength development during heavy pulling movements. Lighter lifts that can be controlled without wraps should be performed without assistance to encourage hand strength. Likewise bar hangs, tennis ball squeezes, and farmer carries can aid in grip strength improvements.